This documentation is intended to be a step by step getting started guide for iOS and integrating Rebar into existing apps. Monkton will help with these efforts to rapidly get your organization up and running.

At present our documentation only covers Swift for code level examples.

This checklist will walk through steps within this document. It is intended to be a high level overview:

Rebar.framework is a Swift framework that has a majority of the user interface and business logic. Our releases will keep this framework on the latest version of Swift.

Note At this time for XCode, Swift frameworks must be on the same version of Swift. Rebar is currently on Swift 5.

RebarSupport.framework is an Objective-C framework that combines some user interface logic, some business logic, and low level implementation code of many security features.

Both libraries are necessary for any project to work and inherit Rebar's security and compliance features. 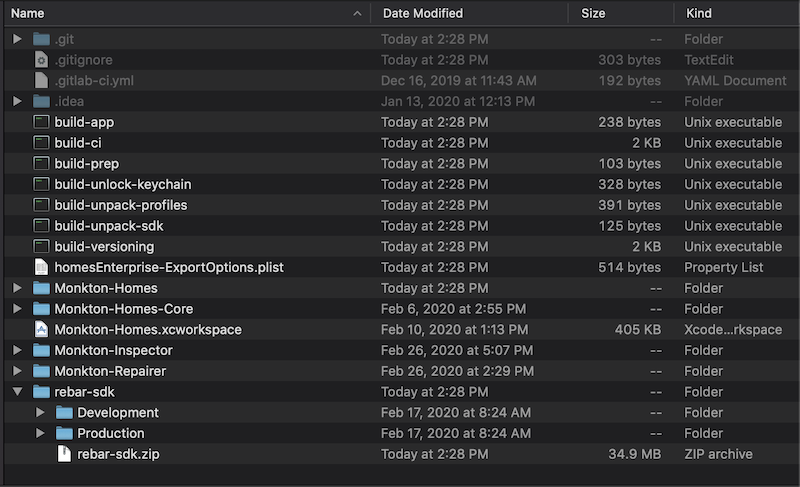 Example folder structure for an app

Note Monkton strongly encourages all app development to be done in Swift.

The Rebar SDK is an SDK that performs various hardening functions for mobile apps. A few main integration points must be hit for building the app. We strongly suggest creating a new and separate iOS App target specifically for the hardened version. This will enable development to continue unabated. With this, we strongly suggest defining integration classes as using that target only along with precompiler #if / #endif flags around code not relevant to your core product.

For instance, there are a few core classes for Rebar you must integrate:

Before starting on your project, we suggest building out a new Target for deployment. This is done by selecting your Project, navigating to "Targets" and creating a new one. The best option is to select your main target and Duplicate it—giving it a name like your-project-name-Rebar to keep code segregated. 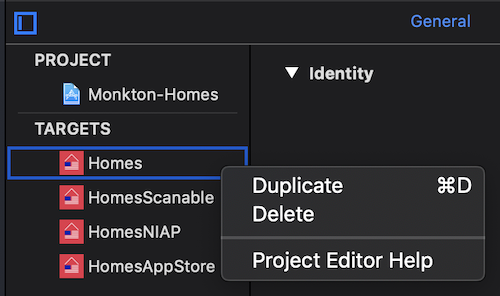 When adding new files to the project, be sure to select the proper targets for the files (For instance, when you add the custom RebarAppDelegate class) 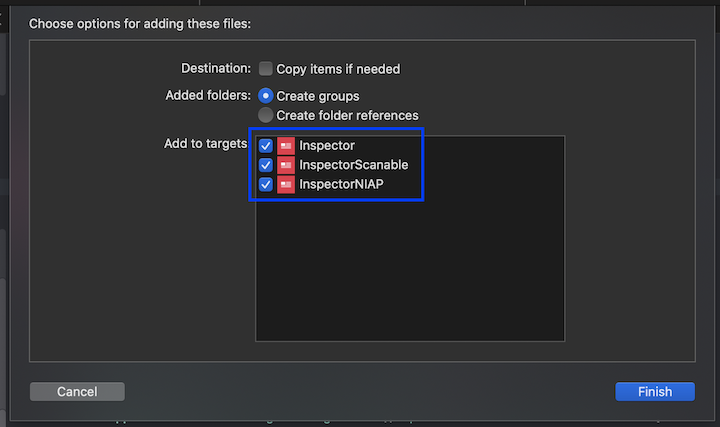 This will allow you to continue unabated in development of your core product and allows you to segregate code for Rebar out of it.

Be sure to add to your .git-ignore file the paths: rebar-sdk/Production and rebar-sdk/Development—this will prevent the unpacked binaries from being stored in your repository during checkin.

You will want to ensure that, when you include this CI/CD pipeline into your project, you unzip the rebar-sdk.zip file before building.

The Rebar frameworks are "fat binaries" meaning they include "slices" of each applicable system they run on. The "Development" frameworks include the x86_64 simulator builds along with the arm64 slice. The "Production" builds include only the arm64 slice for devices. This is for App Store approval in addition to reducing the size of the binary. Monkton strongly urges you to include the "Strip Simulators" script as the

Note Bitcode is not enabled for our builds at this time.

Note Rebar supports two iOS versions behind. At this time we support iOS 12 and iOS 13.

Bitcode is not enabled for Rebar and can't be for projects using Rebar at this time.

Additional build configurations can choose the appropriate library depending on the situation.

Add the -ObjC flag to the Other Linker Flags configuration.

iOS Deployment Target in Build Settings should be set to 12.0 or higher.

For the project, select the appropriate target and edit the capabilities. Scroll to Keychain Sharing and enable the value. Add two values $(AppIdentifierPrefix)YOUR-APP-IDENTIFIER and YOUR-TEAM-IDENTIFER.monktonapps - then follow the directions in Entitlements to finish.

YOUR-TEAM-IDENTIFER is your organizations internal Team ID appending with .monktonapps.

Note if you run the app and get an error about being able to read items from the keychain, you need to manually edit the Entitlements file and remove the $(AppIdentifierPrefix) value from the YOUR-TEAM-IDENTIFER.monktonapps value. This can be done by directly selecting the RebarApp.entitlements file in Xcode.

Monkton has condensed the Build Phase process down into two separate but important elements, embedding Rebar and components, and stripping out extraneous slices of the binaries. Due to limitations in Xcode, having a framework included from different folders for different builds, is simply not an option. To get around this, we must strip out simulator builds before the digital signature operation takes place.

They must be in the order of (as described below): 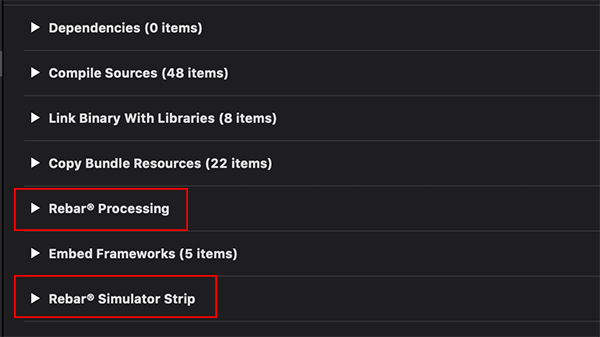 Depending on your project setup, you may need to move around the source directories. For instance, in many of our internal projects at Monkton, we have a root folder (with the Workspace) and project divided into sub-projects. The rebar-sdk and files such as rebar-xcode-actions and rebar-xcode-strip exist there. Due to that, we will call the rebar-xcode-actions with the "${SRCROOT}/.." variable set, to get to the appropriate folder. Typically, you will only use "${SRCROOT}"

Example folder structure for an app

These steps are outlined in the next two sections.

The rebar-xcode-actions script provides a variety of functions in one file. It embeds Rebar, it copies over the configuration files, and it digitally signs the Rebar binaries with the users credentials.

For each target you configure, you will need to add a Run Script in the Build Phases of the target. Name this script "Rebar® Processing". This can be done by tapping the "+" and selecting New Run Script

This will copy the Rebar binaries, embed config files, and then sign them for the application.

This script will strip out any Simulator slices from the Rebar Permissions libraries:

For each target you configure, you will need to add a Run Script in the Build Phases of the target. Name this script "Rebar® Simulator Strip". This can be done by tapping the "+" and selecting New Run Script

Structure is as follows:

You will be required to update the rebar-xcode-actions to add any customized config definitions. By default, the script performs the copy actions defined below:

For Swift, both Rebar and RebarSupport should be included in the necessary files

The App's app delegate should extend from RebarAppDelegate and implement the configureApp function. Any overridden methods should invoke the superclass implementation.

All databases must inherit from RebarDatabase, the root database class. This class manages all security and encryption for the database file. Each database must be registered in the RebarAppDelegate's configureApp method as noted in the App Delegate section above.

Further details on how to configure these classes are located in the Application Databases class documentation.

Further details on how to configure this class are located in the Application Configuration class documentation.

Building the App UI is straight forward. Interfaces can be build via code, storyboards, or NIBs. Whatever the development team is comfortable with.

The UI of the app being developed should be developed as one normally would, Rebar instantiates, contains, and manages the UI for the entire lifecycle of the App. There is no customization necessary (beyond the mainScreen configuration below) within the UI code to accommodate Rebar.

If the class uses storyboards, within the Application Configuration class class you can define as below:

If the interface uses NIBs, the interfaces can be loaded from their NIB automatically within the class files:

This method allows for the instantiation of a welcome screen class. This should return the a view controller that allows the user to create an account or login to the app. This can instantiate a UIViewController itself or instantiate and return a storyboard.

This is an optional setting in the app-config.json file if you aren't implementing a storyboard or overriding this method.

To instantiate a storyboard in iOS, see the example below:

For secure database access, you must inherit from RebarDatabase, please read the App Databases documentation as well as the Data at Rest for more information.

For storing and reading flat files please read the Data at Rest documentation. Rebar implements the RebarFileManager to read and write files securely.

For storing settings, the RebarUserDefaults provides access to securely store settings, this is available in the Data at Rest documentation

At this time only HTTPS calls are supported. Rebar will support other protocols in the near future.